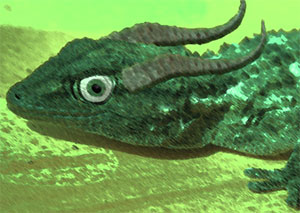 Fairies aren’t the only folklore archetypes that find their way into Cherokee mythology – another common type of legend that you can find in almost every country of the world is one of a great fish, lake monster, or some other type of amphibious beast that has resided in an important local water source since before the age of man. Scotland has the poster child of the trope with the Loch Ness Monster, aboriginal Australia has the Bunyip, China has the shape-shifting Jiaolong, the Northern United States has Champ of Lake Champlain in Vermont, and the Southern United States has the Däkwä of the Tennessee River of Toco Creek in Monroe County, Tennessee.

Or had, rather, as, unlike many of these other cryptids, the Däkwä has been dead for centuries, and the story of how that came to be is one of the more graphic and thrilling versions of the archetype; a perfect illustration of the warrior spirit of the Cherokee.

At an unknown time of Cherokee history, very likely before the settlers arrived from Europe, a canoe of warriors was making its way down the Tennessee River when the monster fish rose up from the depths beneath them and attacked their boat; throwing the entire party into the water. Each warrior, now completely disoriented, fought the waves and each other to get to the nearest shore before it could return and swallow them whole. Luckily, the Däkwä did not surface again, but they did not survive the ambush unscathed – all but one of their warriors made it back safely. The one that didn’t was swallowed whole.

The Däkwä, however, was an enormous fish, and there was enough room inside its cavernous stomach that the swallowed warrior was able to escape instant digestion. He was far from safe, though, and once he came to his senses, he knew he had to get out as soon as possible before it swallowed something else and knocked him into the stomach acids. The only way that was going to happen was to cut his way out through the side, but to make matters worse, he found he did not have his knife; he lost it somewhere as the boat overturned.

The warrior searched frantically for anything sharp that he could pick up and use to hack his way out and came across a number of whole mussel shells that had also yet to be digested. With nothing else to work with, the warrior felt for the shell with the sharpest edge to it and immediately started cutting his way out through the stomach lining. The Däkwä thrashed about in the waters as its stomach came under attack, and the quaking innards threw the warrior up and down the organ. The acids and scorching body juices that the warrior was lucky to avoid at first were now flying all around him and they burned his flesh almost down to the bones. Both of them were suffering searing amounts of pain, but the warrior refused to give up. He cut, and cut, and cut until finally there was a hole large enough for him to get out of.

The cold water of the river relieved his scalded skin and he pushed through as hard and as fast as he could until he could see the sky above him. Once he broke through the surface, he swam towards his comrades on the shore. When he was able to stand on solid ground, he turned to the Däkwä and watched it die from its wounds; an impressive victory of man over nature if there ever was one.

Instead of the young, dark-skinned man he was used to seeing in the water, there was an elderly man with bleached white hair and skin looking back. The stomach acids of the Däkwä had permanently scorched the color right off his body (or, in some versions, the hair as well, leaving him bald for the rest of his days).

Another version of the story is told by Wahnenauhi, a famous Cherokee storyteller from the 1800s, and was also collected into James Mooney’s Myths of the Cherokee. In this version, a little Cherokee boy was sent to do an errand by his father, but instead of obeying his father, the boy ran down to the river (presumably the same Tennessee River) to goof off. As he played in the sand with a mussel shell that he found on the shore, some of his friends from the village floated by on the river in a canoe and invited him to join. The moment he stepped onto the boat, however, his weight caused it to tip over and send him plunging into the cold waters below.

As he was submerged in the dark river, a giant fish spotted him and swallowed him right then and there. Luckily, the boy landed in a safe spot of the fish’s stomach where he would not be digested. After a while, the boy became very hungry and began to look around inside for food he could eat before the fish got a chance to dissolve it. When he couldn’t find any, he saw the fish’s liver hanging down from up high and, thinking it was dried meat as he was accustomed to back in the village, he took the mussel shell that he was playing with earlier and cut it down (!). The fish, suddenly overcome with pain and nausea, immediately vomited the boy back up.

There is even an identical tale from the Ojibwe/Chippewa tribes of the United States and Canada where Manabozho, the hero of the Anishinaabe (which encompass the Ojibwe) is the warrior who gets stuck inside the monster fish and has to fight to escape. It is an extremely common type of story throughout history that almost every culture can identify with and thus adapt. With water being one of the most essential and dangerous elements of early civilizations across the world, it becomes very understandable that it would be the setting for all kinds of monsters, heroes, gods and spirits that could fill the gaps of understanding. Stories like this taught early man to be careful and watch what he was doing as he paddled down the rapids with food supplies for his family or village.

Of course, just because stories of monsters may carry similarities across nations does not mean they’re not true – that’s what the legend of the Kraken taught us (see Creatures of the Night). Maybe those stories are similar for a reason…