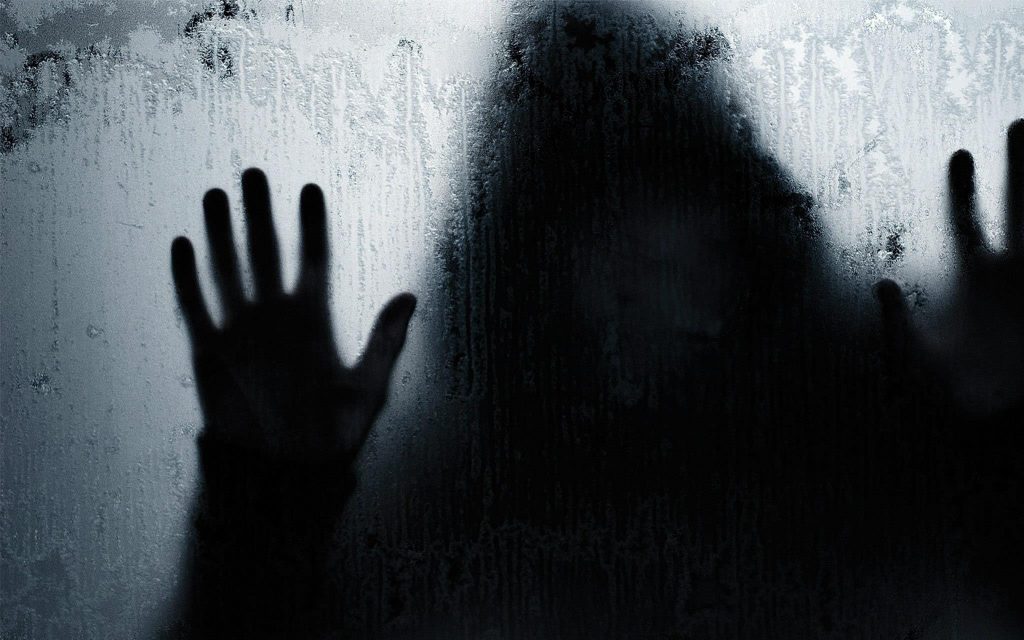 This article comes from The Shadowlands, reprinted and shared with permission.

I interviewed the owner of this haunted house located in southern New Jersey about 12 years ago. This is the story she told of some incidents in her house and others with her family. This house is on a quiet street in a small town.

It started in the early sixties , when Joan’s brother Mike started dating a wild girl whom the family called Reds. One night out, Mike and Reds were joy riding around Philadelphia. Both of them were intoxicated. Reds kept telling Mike to drive faster and faster. His speed still did not satisfy she reached her foot over and stepped on the gas pedal, Mike lost control and slammed into a utility pole. Reds was killed in the crash and Mike was seriously injured. He was even unable to attend the funeral. He was ordered to remain at home in bed. When the family returned from the funeral they went up to Mike’s room. As soon as they walked in the door Mike began to describe exactly what Reds was wearing in the coffin, down the rings and other jewelry. The family asked him how he knew all this since he wasn’t there. He told them that Reds had just been there to visit him.

Years later Joan’s son, Bobby, was supposed to ship out to Vietnam on the following morning. His Uncle Mike told him he would stop by in the morning to give him a lucky coin that would bring him good luck and protect him. His Uncle was very persistent about Bobby getting this coin. The next day, The whole family was there to see bobby off at the airport except for his Uncle Mike.. As they waited for him to arrive Bobby bought his 2 young sisters Raggy Ann dolls. His Uncle never showed up and Bobby had to leave without the lucky coin. When Joan arrived home her neighbors told her to put on the TV and watch the news. She turned on the TV and the scene was of her brother Mike laying dead in the street. He had been killed while attempting to rob a bank, he was trying to steal a coin collection.

One night while Bobby was on guard duty near the front lines, He saw a figure approaching him in the distance. He called out for the person to identify themselves. Bobby had never fired his gun at a person before and He was hesitating. The figure was even closer in an instant and he recognized it, it was his dead Uncle Mike. His Uncle told him to turn around and he spun around to be face to face with a North Vietnam soldier with his bayonet raised. He fired instantly killing the enemy soldier. He quickly turned around but his uncle was gone. Joan received many letters form men in Bobby platoon who told of mines not going off, shells veering off in opposite directions, etc. All of these occurred when Bobby’s life was in danger. His uncle had failed to give him the lucky coin, so he was protecting him from beyond.

During the war the sisters had started sleeping in Bobby’s room. This was the same room that Red’s had visited years before. One night they both awoke to find the Raggy Ann dolls sitting up in bed laughing at them.

After the war Bobby went to work as a bus driver. On one late night run he got the feeling of his Uncle’s presence just like in Viet Nam. He heard his Uncle say “turn around”, he did and there was a man with a knife ready to stab him. He overpowered the man and called the police. Bobby still has times when his Uncle Mike appears to aid him.

The day before I conducted this interview Joan’s grandchildren were over and were playing in the room that was once Mike and Bobby’s room. They ran downstairs to Joan and her friend and claimed someone was watching them as they played. The women went upstairs to look. The room was very cold, but they found no intruder. The girls said they were being watched form the closet. Joan showed the girls there was nothing in the closet, she even stood inside to point this out. As she stood in the closet, she looked up and noticed a small hole in the ceiling above the closet door. She inspected the hole and found a box full of old clothes and things. Among them were the Raggy Ann dolls that had come alive years before.

For the skeptics among you, I met Joan through my Mother at our Church. She became a good friend of the family and later became our town’s mayor. I also know Bobby, he was my football coach. Real people, real story.

See more from The Shadowlands at www.theshadowlands.com.

The picture in the article here isn’t related to post, I just need some eye candy. Got it from Google Images.