Montgomery, of the eponymous county in Alabama, is the capital city of the state with a long history of growth and cultural accomplishments for the South – being the birthplace of Nat King Cole and Big Mama Thornton, the city where Hank Williams Sr. got his start to a legendary career, the first city in the U.S. to install electric street cars for public transit as far back as 1886, and an important city for the civil rights movements of the mid-20th century where Rosa Parks was arrested in 1955 for refusing to give her bus seat to a white man and where the famous “Selma-to-Montgomery Marches” took place in 1965.

With a city as historically significant as Montgomery, it follows there would be ghost stories that circulate well-known halls and buildings. Huntingdon College is haunted by the spirits of The Red Lady and The Ghost On The Green, both victims of suicide, the Tallapoosa Entertainment Center casino is supposedly built on a Native American burial ground, the Maxwell Air Force Base has shadows that wander the student dorms and randomly soak sleeping cadets, and even the State Capitol Building itself is said to have a confederate woman that wanders the halls and turns on the bathroom water faucets for no apparent purpose.

And then you have stories coming from areas around the city that are not as well-known, but considerably more interesting. The legend of The Thirteen Bridges is one of them. Now known as Barganier Road and located just outside the city of Montgomery in Cecil, Alabama, the former Thirteen Bridge road was named quite literally after the thirteen little bridges that went over creeks and lakes and was rumored to be a place where thugs and gang members sometimes hung out.

It is said that the bridges are haunted by the spirits of a woman and her child who died in a car accident after driving over the bridges. Supposedly, you can count thirteen bridges going through the pass one way, but only twelve bridges going back. On some nights, like Halloween, you may even hit something that looks like a dog. When you go outside to check on it, it will appear dead and then the woman and her child will appear to you in the distance. Then the dog will suddenly get up, dart towards the thirteenth bridge and disappear with it, leaving only twelve bridges. The canine spirit is the dog that caused the car accident in the first place and died along with the woman and child.

Another variation has it in reverse, saying that you will only count twelve bridges going across the first time, and the thirteenth one will appear, covered in a strange mist, when you go back. If you look into the mist as you cross it, you will see the face of a girl who died there and will try to pull you into the water.

Another reported experience was that, years ago, a teenage boy moved to Montgomery, Alabama, and was introduced to the legend as a local test of bravery. The boy and a friend took a car to get there and the boy was to stand on the bridge for five minutes. As he stood there, he slowly became overwhelmed by the presence of something he couldn’t identify. When he turned to look for his friend, both he and the car were gone. The car couldn’t have left on its own as the gravel grinding under the tires is too loud to not notice it leaving. The boy went off to look for the car and found that it was back on the other end of the bridges – in fact, the car had never left… it was the same bridge he had stood on previously. Somehow, he had moved from one end of the road to the other without noticing it.

Thankfully, the former Thirteen Bridge road is closed, likely due to the sad shape of the bridges and the increased traffic from curious kids and seedy individuals who usually gravitate towards those sites, but the legend and its bizarre experiences grow to this day. 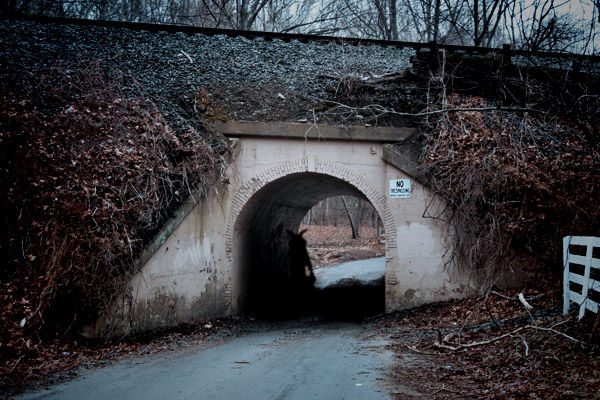